Five years ago, Hal Ketchum packed up his guitars and left Nashville, turning his back on a successful, 20+ year career in country music. He'd already sold more than 5 million albums, racking up a half-dozen Top 10 hits — including staples like "Small Town Saturday Night" and "Hearts Are Gonna Roll" — along the way. But Ketchum was exhausted, and his multiple sclerosis, a condition that often left him partially paralyzed, wasn't making matters any easier. He wanted to go home. And that's exactly what the singer/songwriter did, heading back to Texas for some peace, quiet, and serious introversion.

"I was hiding out," he admits. "I'd been in the public for so long. I didn't even go into town; I had my daughter bring me groceries. I develop a form of agoraphobia, really. I found pleasure in watching the stars at night and watching the sun during the afternoon. I also put out a lot of bird feeders and basically talked to myself all day long."

It was a relaxing time. Try as he might, though, Ketchum couldn't stop his musical wheels from spinning. As he sat on the porch of his home — a renovated, 19th century grist mill in the middle of the Texas Hill Country — he began documenting everything he saw. He jotted down the memories that crossed his mind, too. Before long, new songs began appearing. The process felt entirely different from Ketchum's final years in Nashville, back when songwriting had been a job. This time around, songwriting was something more. It was personal. It was casual. It was also rallying cry for Ketchum, who decided he wasn't ready to give up music, after all.

Those new songs became the foundation of Ketchum's newest album, I'm the Troubadour. Recorded in a series of single takes, I'm the Troubadour is the sound of an artist finding his own redemption in the strum of an acoustic guitar, the boom of a kick drum, and the trill of an upright piano. It's an album inspired by years of struggle, performed by a songwriting legend who's glad to finally get his groove back.

On I'm the Troubadour, Ketchum ditches the country rulebook and tackles a combination of folk, blues, and soul music instead, tying the whole thing together with the rootsy rumblings of his studio band — whose members include guitarist Kenny Grimes and drummer Rick Richards — and the same croon that helped make him a permanent member of the Grand Ole Opry in 1994. I'm the Troubadour also marks his first release for Music Road Records, an Austin-based label co-run by folk artist Jimmy LaFave.

Strangely enough, the latest release from Ketchum — now 61 years old — brings to mind the thrill of his earliest albums. Back then, Ketchum was a young cabinet maker from Gruene, TX, who wrote his own songs about love, longing, and life in the American South. He hit the country market shortly after artists like Lyle Lovett, Steve Earle, and Travis Tritt, three likeminded troubadours who also wrote their own material. A bemused Earle called the movement "the great credibility scare of 1990," laughing at the fact that country music — typically a conservative genre — was suddenly being steered by young, creative wild men.

I'm the Troubadour has a similar sound, a left-of-center immediacy that makes it one of the most important albums in Ketchum's career. After logging nearly two decades on the roster of Curb Records, Ketchum has earned the right to call his own shots. He isn't following any rules. He isn't catering to any trends. Instead, he's simply following his muse wherever it leads, from the bluesy, roadhouse rock & roll of the title track — a biographical song about touring across the country, one stage at a time — to the jazzy swell of "New Mexican Rain." Meanwhile, he also puts an updated stamp on two of his older tunes, even turning "I Know Where Love Lives" into a surprise duet with blues singer Tameca Jones.

"I'd reached a point during my time in Nashville where I'd fallen into that mill worker mentality, where you're only as good as your last record," Ketchum remembers. "If the phone didn't ring for two days, I was crushed. I'd worked myself into this odd place, where you have to be validated by your previous accomplishments. To be liberated from that kind of pressure is really fantastic. The pressure's off now. I'm just old Hal now. I'm 61 years old, and I still have a lot to say."

Half a decade ago, Ketchum thought he'd permanently closed the book on his songwriting career. Thankfully, I'm the Troubadour starts a new chapter. 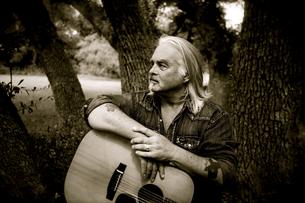