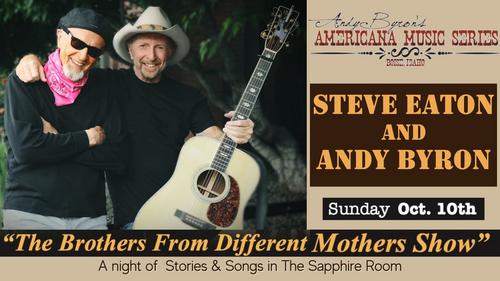 Steve Eaton is an Idaho gem, a favorite of music scenes across the state and, most importantly, the coolest guy in the room everyone wants to know. Steve has had artists such as The Carpenters, Anne Murray, Glen Campbell, and Art Garfunkel record his songs. It takes a special musician to achieve commercial success, artistic recognition and corporate appreciation. It takes a special human being to come out of it with the moniker “Everyone’s Friend.”

Some of Andy Byron’s first live performances took place on L.A.’s Troubadour’s stage. After that, he spent his musical career opening for the likes of Willie Nelson, George Jones, Charlie Daniels and Clint Black. He started the popular “Americana Music Series” in 2013 to help bring more live music into Boise and loves any opportunity to make music with his friends.

Don’t miss your chance to catch both these Idaho legends together on one stage as they celebrate each other’s music and tell stories you will not want to miss!