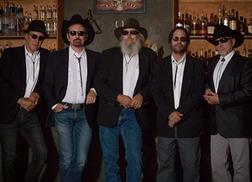 with The Mighty Red Melons

The Mighty Red Melons pay tribute to two more of their C/W heroes, George Jones and George Strait.  Both born in trailer parks to the sound of Hank Williams playing on scratchy 78's in the back room while the family played darts in the kitchen and got mad at the noise. This hollerin' caused these two babies to start singing when they were only three days old, and they each were making a living on the street corners of Ferguson Tennessee, and Lewiston Idaho respectively by the time they were 5. Although from different generations their paths crossed often at Safeway stores across America as they looked into each other's baskets to see what was in there, and then sang about it. Why, several of those songs can still be heard on the radio from time to time now and then, although with all the shit on there these days, this stuff gets closer to the bottom shelf every year. Anyway, if you want to hear real honky took from the Two Greatest George's....this show will have it from stompers to weepers and everything in between. Bring your hankies and your boots, time for another great Melon Tribute Show!

Opening is Twangtown! Hear Lisa Theo and her great vintage country band playing classic western, jazz and swing. It's going to be a cool night of the real deal, in The Sapphire Room!